Can our democracy be improved? Is the Two Party System the best we can have? Does it truly represent The Will of The People?

Try the polls and quizzes herein. You will learn something new and useful. 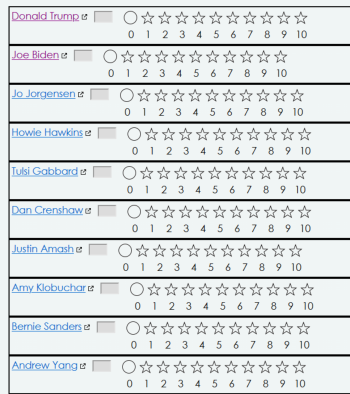 The 2020 US Presidential election is a race between two men with HUGE negatives. We have rioting in the streets. Some fear a new civil war.

Wouldn't it be nice to have other choices? Wouldn't it be nice to be able to choose a candidate that is more acceptable to the entire country instead of giving two hated factions turns at running the country? (On the other hand, if you actively support Trump or Biden, please participate as well! It would be nice to approximate a random sample of the electorate...)

We could have this, if we had a better voting system! There are several possibilities, including Ranked Choice, Approval, and Range Voting. To get a feel for which is best, try them all. Click the link and you can take a presidential poll using four different voting systems. A mix of candidates from all over the political map has been added to make it interesting, and to simulate what elections could be like in a more harmonious America.

UPDATE: The real world race is over, but if you haven't voted here yet, go ahead and do so! Think of it as a do-over.

(People from outside the US are also invited to try out the poll to see these voting systems in actions. But please indicate your citizenship status so we can have a modicum of accuracy.)

You can see the results so far here. Or, if you are a serious election science nerd, you can feast upon the extended results, which includes Condorcet counts, histograms, counts of Bullet Voters and more. 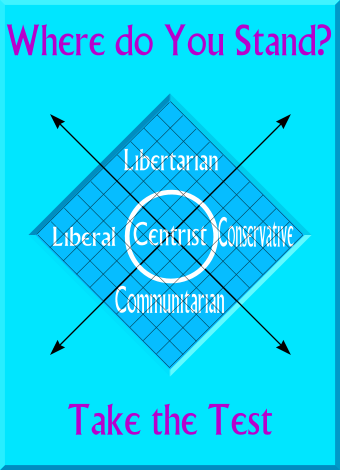 The original purpose of this site: a political quiz based on the Nolan Chart with a much higher degree of precision than the World's Smallest Political Quiz. I wanted to find out where the Libertarian Party was way too radical, and where they could stick to Principle without losing too many votes. I also wanted a better tool to get voters to think outside the Left-Right political paradigm.

The classic version used blatantly emotional language to measure sentiment and see what people think when exposed to propaganda different from that put out by the mainstream media. People complained about bias.

The latest version strives for objectivity, and is a suitable tool for civics classes to illustrate some of the possible political positions. If you haven't already, try it out now!.

See how other people scored. Overall scatter plots, and answer tallies by question for each area on the political map. One of these days, I want to do some correlation studies as well. Is there an ideology which doesn't fit this map? A mix of conservative and liberal positions unknown to today's pundits?